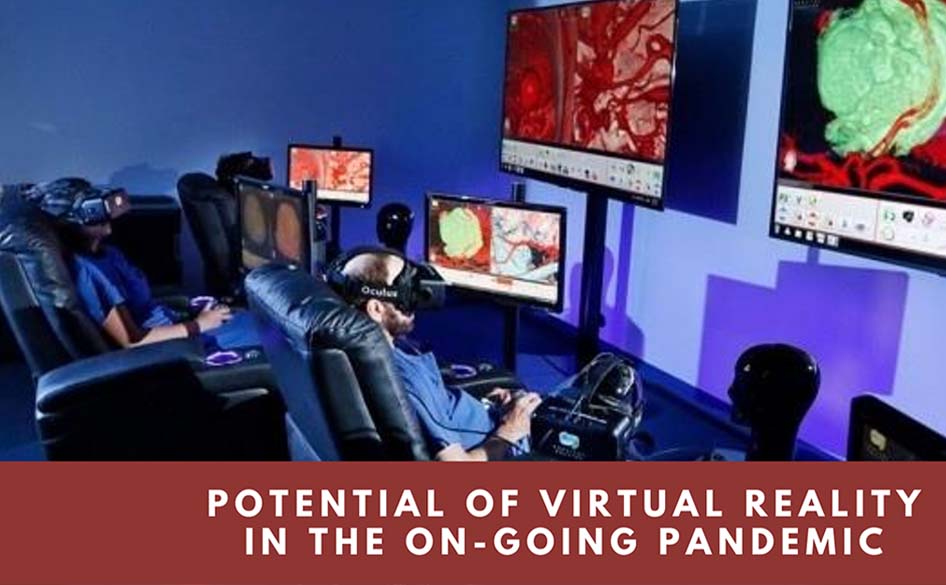 The concept of a virtual reality made its entry into the mainstream as early as in 2007. When Google introduced Street View. Ever since then, highly ambitious tech companies had been developing all sorts of solutions. To make their jobs easier and their simulations more realistic. They were making a general effort to revolutionize the way we see and use graphics. And in countless ways, they have been successful:

In the entertainment industry alone, there was a great fortune. In 2018, gaming/entertainment held 40.5% of the VR market share. And, 80 percent of the VR content were video games.

Emerging importance as a training platform

It was obvious to all parties (consumers, investors, and developers alike). That the entertainment industry would be the most important pillar in VR’s growth. Ever since they started, VR equipment such as the Oculus VR and HTC VIVE had secured an important role.

The isolation of COVID-19, however, changed the game. It forced every single organization on the planet to rethink digitalization, remote presence. That also included the importance of a virtual world. People are now acknowledging that VR’s potential for research and training applies to almost any field imaginable. Following are three examples

It is an online VR training platform. It specializes in teaching soft skills. Such as public speaking, sales and negotiation.

It is a VR company. That creates simulations in 360-degree vision. Their virtual environments is famous. To train oil refinery employees in startup.

They have worked with Immerse .The aim was to create an “interactive, gamified” VR training program. For the warehouse cargo loaders. The workers used hand controllers. With that, they mastered the art of stacking virtual cargo boxes. That was quite efficient. A healthy competition was also there. Because, they had scoring systems.

The switch to virtual showrooms

Furniture stores (such as IKEA and NDT). And car dealerships were some of the most notable businesses to go virtual. Developing the same technology as Google’s Street View, they continued to showcase their business on Virtual Showrooms. That was quite good. A 3-D space that uses wide photos to give the visitor a sense of walking around. And look around in the store. Many see digital showrooms as an unfavorable emergency solution. They have trust issues. For many reasons. But, it is worth noting that the showrooms also have advantages over in-person outlets:

Because anyone with an internet connection can enter the store from anywhere. This is the best part. Above all, this greatly increases the importance of digital marketing techniques. Techniques that direct web traffic to the company’s website, and of the web development team that makes that said website. It is an example that if one lockdown can stop one service, it can make two others available.

The company can focus more on the design section. They are relieved from the responsibility of managing a team of salesmen. They get to spend more valuable time thinking about what the customers want and how they want it.

Their overall cost declines too. They can display their things on a good website. In this way, they will get a new business overall. A new normal is coming, and before that, they might have a new eCommerce business set up. This is only adding up the positives. Instead of focusing on the negatives.

The virtual world is more personalizable

The business venues shifted into a fully customizable virtual world. As a result, companies can now have greater control over a few more things. Like, how to pitch their service to potential clients. The entire storefront, catalog or even slogan, could be personally tailored to suit the customer’s personal preferences.

This gives a chance to grow the roots of the business. Because if the roots are fine, the trunks will grow. And the primary sources of a company are the values and image. Customers should get a direct idea about a business through their online presence. Because everything is online now. As a result, clients must get a good impression of business online. Because every client will search for a thing before buying it.

So, in this situation, businesses must customize their world. It will give them a massive gain in the long run.

The general public is still many innovations away. From being able to look at a holographic display with the naked eye. Nonetheless, there is an outburst of AR devices recently. Such as the HoloLens2- and they are aiming to change lives in workspaces and educational institution.

It is an award-winning app. An app that Case Western Reserve University uses to teach its medical students. Using a VR headset, the AR program lets students view the literal ins and outs. Of a human body. This effectively tells them about the placement and appearance of the organs. That too, without even dissection. Med students widely appreciated the visual nature of this learning system. Because, that is indeed cool. Not to mention, making learning more faster and efficient.

It is a powerful telepresence app. That uses AR to create a virtual workspace. The program can track movements of colleagues. And at the same time, imitate their movements in lifelike 3D avatars. So that the users can “walk around and collaborate. As if we’re in the same room.” Due to COVID-19, they gave free access to their basic personal use plan. A bold statement that while lockdown restrictions are cutting people away from their usual workflow, VR/AR is actively doing something. To rebuild a new normal. Where people do things digitally.

This is indeed great. It has the power to create something. Most importantly, to change the future. For the better, of course.

Implementing VR technology in Bangladesh comes with its own set of challenges. As a large percentage of the country’s population lacks access to VR. Or even the knowledge about how to operate these devices. But that should be the main reason to research deeply. So that the solutions are as user-friendly. And simply accessible as much as possible.

But, every case is different. So clients must communicate effectively with their development teams. And create highly customized solutions. That fits their business vision. That is a fruitful thing.

Riseup Labs takes pride in being the first well-established and well-equipped VR development company in Bangladesh. Their comprehensive XR (cross reality) environment comes with a wide variety of devices. And programs that aid in content creation at an enterprise scale.  The list of AR/VR/MR solutions includes (but not limited to):
– Game development (Such as Shark Attack)
– Narrative content creation (such as the Speech of March 17)
– 360 virtual video tours (such as Xtreme Aquatic Rider)
– Social media AR effects
– Object tracking, image recognition, simulations, etc.